9 Ways to Automate Your Amazon Business With RepricerExpress

9 Ways to Automate Your Amazon Business With RepricerExpress

Maximising sales and profits is the shared goal for all Amazon sellers. A while back, we added a new set of features to RepricerExpress including our very powerful Automations feature that gives you the ability to create dynamic processes with a wide array of conditions to automatically move a product from one rule to another. In this post, we’ll be looking at real-life examples of how RepricerExpress users are using Automations to save time and boost profits!

When your products are imported into RepricerExpress, they automatically get assigned to your default rule, whether they’re FBA or MFN.

If you’re selling via FBA, you can win the Buy Box at a higher price, so it’s worthwhile creating specific rules for your FBA and MFN products.

For example, I might sell 80% MFN and 20% FBA on Amazon. If I want my FBA and MFN items to price differently then I need to set up two different repricing rules.

To save time manually assigning each product to the respective rule, you can set your MFN rule to be the “Marketplace Default” so that all your SKUs will automatically get assigned to your MFN rule. This is the smarter clever choice as you sell 80% via MFN.

Then you’ll simply need to create an automation that will automatically apply your FBA Rule to all your FBA SKUs.

This automation will check once a day that all your FBA SKUs are correctly assigned to the FBA Rule. It’s very handy if you add new FBA SKUs regularly, since you won’t have to add them manually to the relevant repricing rule.

2. Automate to reprice lower over time

What you probably want to do is shake things up and move the relevant products to a more aggressive rule. However, you don’t want this to be a permanent change, just a short-term fix until things pick up again. Once this is the case, you would want the SKU to be moved back to its original rule.

Automations allow you to do just that. Without Automations, this would require a lot of manual work. Price checking, rule changing and monitoring of SKUs over a lengthy period. Automations lift these burdens and do all the work for you.

Let’s illustrate one of these scenarios by taking the example of a SKU where sales have completely stopped for the past 7 days.

The new rule would drop the products’ Min/Max values by 15%, allowing the prices to drop just enough to encourage sales.

You can then simply set one automation like this: 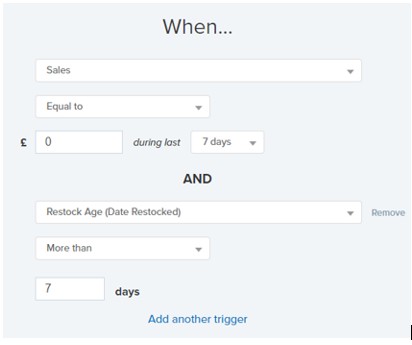 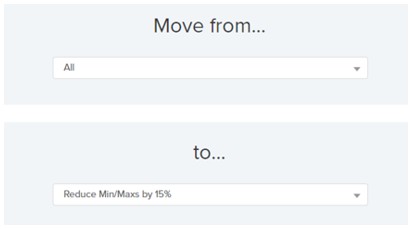 Please note: When using the triggers such as sales equal to zero in the last X days, new products that have just imported into RepricerExpress may also get automated, therefore we will need to add a secondary trigger such as “Restock date” to stop the new products being automated and moving to the new pricing rule.

Taking this as a starting point, you can then develop more complex Automations in RepricerExpress so that you can reprice lower if no sales have been triggered over X days, months etc. Of course, lower prices are only one factor in your search for the Buy Box, so it’s worth checking that your seller metrics are equivalent or better to your competitors’ metrics—if they’re not, then it’s time to automate your feedback management with a solution such as FeedbackExpress.

The Automations below will lower your prices more and more if you haven’t had a sale in 7, 14, 30 or 60 days—but stop when you start to win those sales. You can also do the same if you haven’t won the Buy Box in the past X days, you have too much stock or if you have FBA long-term storage fees due.

3. Automate when in a price war

Another very useful time to use Automations is whenever you’re in a price war (when companies continuously lower prices to undercut the competition).

Within the Product Status Preferences screen in RepricerExpress, you’ll be able to easily set what a price war is to you — after how many price changes within X hours you consider yourself in a price war. 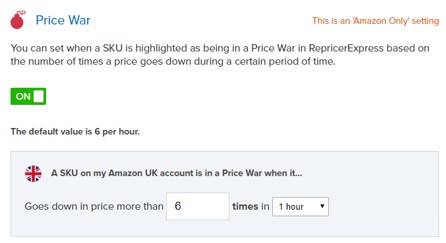 After inputting this, it will be very easy for you to set up an automation that will enable you to automatically move the SKUs affected to a new rule, where you can Match or Price above instead of Beat, helping to prevent a race to the bottom.

Another option if you’re involved in a price war would be to stop repricing and go to Max price until things settle. Sleep Mode is very useful for this and you can set it up within your rule.

But you could also set up an automation for this purpose. 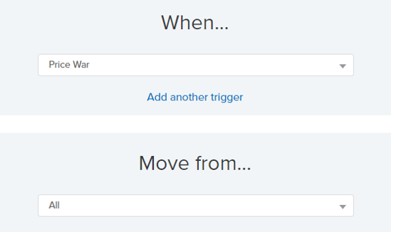 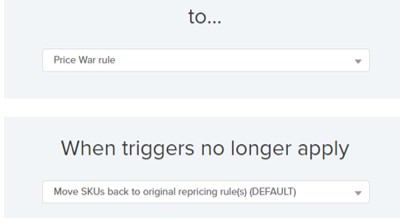 We normally recommend you add an inclusion by seller location such as Vatican City (as shown below). That way you’ll have no competition possible and you’ll go to Max automatically until the system detects you’re not in a price war anymore and you’ll go back to your original rule.

Imagine a scenario where you noticed sales have rapidly increased for a product. In these instances, you might want to assign them a new rule where you’ll have higher Min and Max prices, to increase your profit margin.

On the Product Status Preferences screen in RepricerExpress, you’ll be able to set what is a best-selling product to you — based on the number of units sold or value of sales over the past X weeks). After defining what you consider as a Best Seller, you’ll then be able to create an automation where the products will be moved to a rule with higher Min and Max prices. 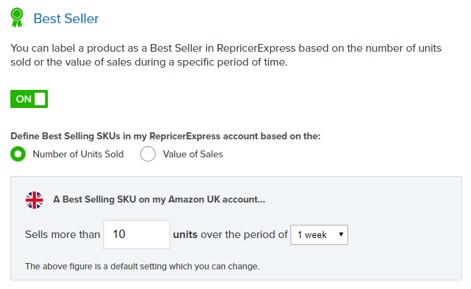 That way when RepricerExpress flags a product as being a “Best Seller”, we’ll automatically move it to your new rule enabling you to sell at a higher price and to make more profit! And, whenever the product doesn’t match the criteria and is not a Best Seller anymore, it’ll go back to its original rule. 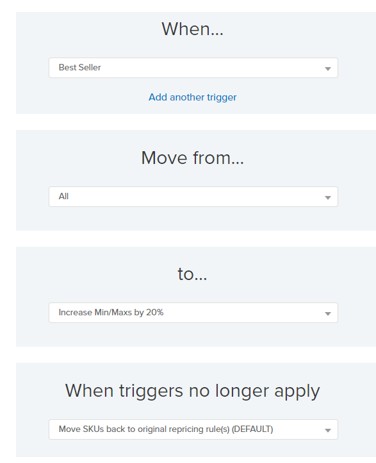 5. Automate to sell out stock

Let’s picture a situation where you have stock that is likely to get Amazon long-term storage fees applied to or simply stock that has been hard to move and you just want to get rid of to make some room for new products (in the example below, you have stock for this SKU since 2016). 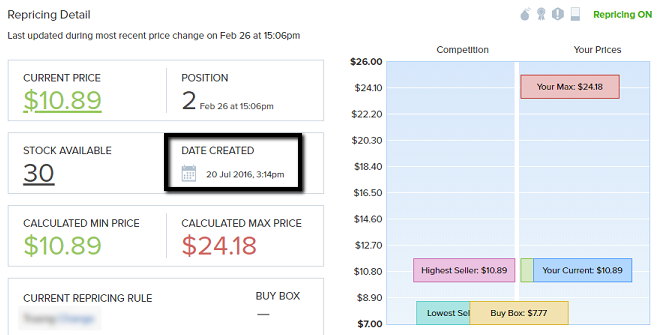 With RepricerExpress, you’ll be able to create the perfect automation and save yourself a lot of manual work.

First, what you’ll want to do is create a brand new rule where you’ll lower your Min and Max prices for example, so that you’ll get priced cheaper and will sell quickly.

And then you can set up your automation, so that if a SKUs stock is older than 7 months for example, then your product will automatically get this new rule assign and will sell quickly. 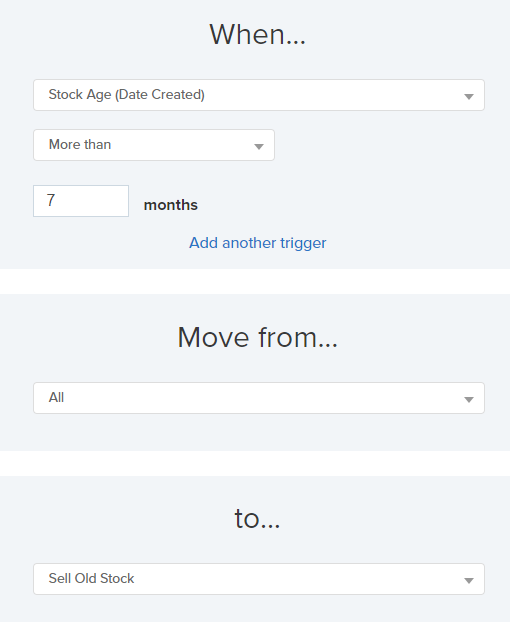 This automation will run every 24 hours and any SKU with a stock age older than 7 months will automatically take up the new ‘Sell Old Stock’ rule. This will save you a lot of manual work as you won’t have to identify each product one by one.

6. Automate to push sales when you haven’t won the Buy Box in a while

Another great way of using automations would be to shake things up and move any SKU that hasn’t won the Buy Box for a couple of days to a more aggressive rule. Again, automations are great because you don’t want this to be a permanent change, just a short-term fix until things pick up again.

We’re going to follow the same logic as before and create a more aggressive rule that will get applied to all your SKUs that didn’t win the Buy Box for the past 7 days, for example.

In this specific repricing rule, I’ve chosen to use the Buy Box formula. Many of our RepricerExpress users have suggested many formulae that they report as bringing in higher sales through winning the Buy Box more often, but as sellers’ inventory and prices vary widely there simply isn’t a formula that can guarantee winning the Buy Box. We have seen commonalities across price brackets, so we recommend the following setting as a starting point.

And then you can set up your automation, so whenever an item hasn’t won the Buy Box in the past 7 days for example, it will be moved to a more aggressive rule to try and get in the Buy Box spot. 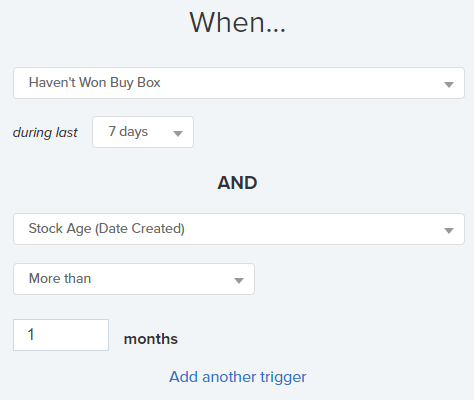 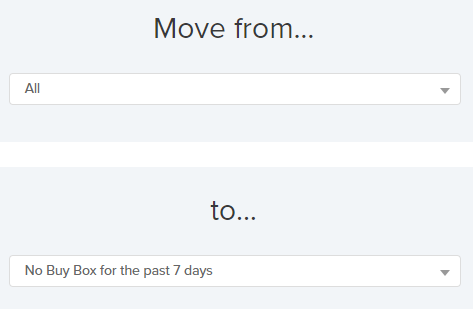 Note: as soon as you create an automation, it will apply for all SKUs that haven’t won the Buy Box for the past 7 days and this will also include brand new SKUs recently added, therefore we recommend using a ‘Stock Age’ trigger too, so that new SKUs won’t get automated.

This automation will run daily and will apply the ‘Haven’t won Buy Box’ rule to all SKUs that weren’t in the Buy Box spot for the last 7 days.

7. Automate to push sales if they have stalled for the past few weeks


Let’s illustrate this scenario by taking the example of a SKU where sales have completely stopped for the past 7 days.

The new rule would drop the products Min/Max values by 15%, allowing the prices to drop just enough to encourage sales.

You can then simply set one automation like this, that will move your SKUs to a ‘more aggressive’ rule in order to try and trigger more sales. 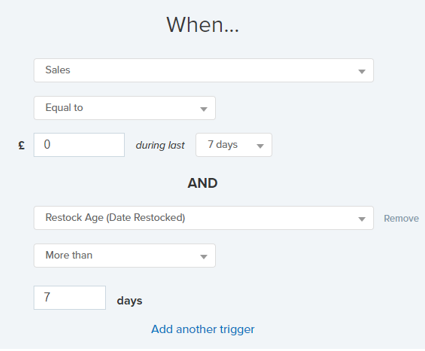 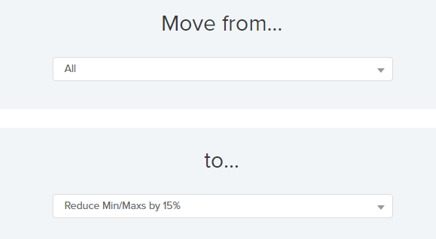 Note: again, when using the triggers such as sales equal to zero in the last X days, new products that have just imported into RepricerExpress may also get automated, therefore we will need to add a secondary trigger such as ‘Restock date’ to stop the new products being automated and moving to the new pricing rule.

8. Automate to push sales if orders are too low


Another automation you can easily set up in your RepricerExpress account to push sales is based on your order count. For example, if you feel like one of your best sellers is not selling as well as it used to be. 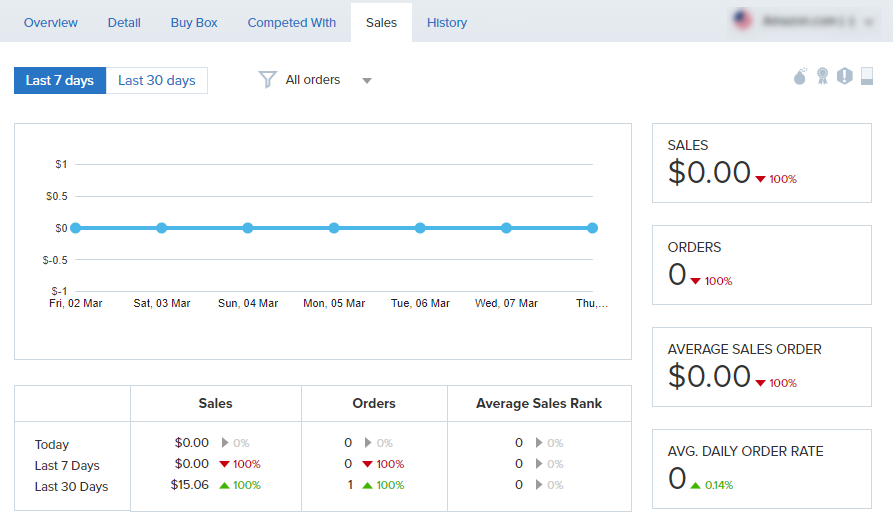 Once again, we’re going to create a rule that will be a tad more aggressive and this rule will automatically be applied to all products with less than 10 orders in the past 7 days, for example.

The rule will lower the Min/Maxs as well as Beat by a higher amount, to try and really boost sales.

And I’ll simply create the automation that will do all the work for me. 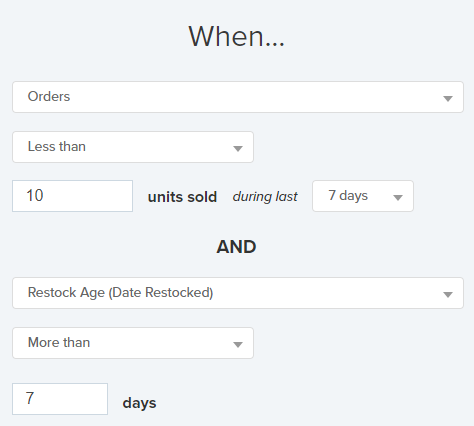 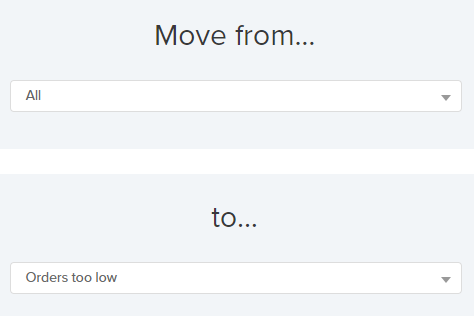 Note: once again, we’re adding a Restock date trigger to stop the new products being automated and moving to the new pricing rule.

RepricerExpress will use the Amazon FBA recommended removals report to flag SKUs where long-term storage fees are due.

A great way to avoid long-term storage fees is to create an automation that will move the relevant SKUs to a new rule that will make them more competitive and encourage sales.

When creating the automation, select the stock level that you would like to apply, so only products that are due long-term storage fees and have a stock quantity greater than 50 for example, will be automated. 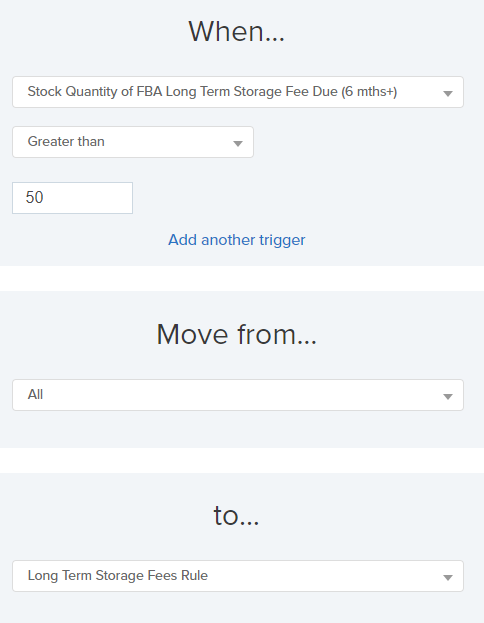 Note: You’ll be able to select either the 6+ months or the 12+ months FBA long-term storage fees when creating your automation.

We hope this article has helped to show you the benefit of using Automations for your Amazon business. They are a great way to keep your prices competitive with minimal effort. When starting off, we recommend that you set up one automation only and observe how things are working. You’ll be able to see how many SKUs your chosen automation will affect before setting it live.

Need help? If you require any further information about Automations or would like some help setting them up, just contact our amazing support team via [email protected] or via Live Chat and they’ll be more than happy to lend a helping hand.

Related: 10 Tips to Help You Get the Most Out of RepricerExpress